I've managed to mix up my new batches of clay this week. 300kg of high flux porcelain in the blunger and 100kg of heavily grogged body in the dough mixer. 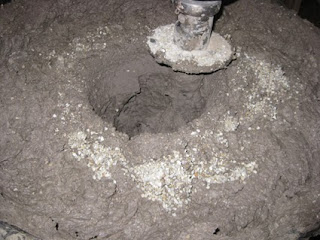 Heavily grogged boddy in the doughmixer. I've just added a couple of handfulls of pink granite grit from the local Mountsorrel quarry and two of white feldspar, topped off with 7 kg of 1 -3mm corderite grog. 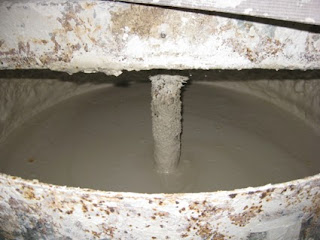 The blunger which I mix the porcealin in is a bit rusty, the little rust which falls in, adds some interesting iron giving some lovely results in the kiln. I'll mix the clays for a couple of days more and then start the epic job of wedging and bagging up. I don't use a pug mill so it will take me a couple of days to get the grogged body wedged (around teaching). The porcelain will be fine sitting in the blunger and I'll just keep putting it out on plaster and wedgeing until I have enough to make the work I want. I've now got two dates in mind for the next firing; either the last week of April or the first week of May. It seems along time off but I know it'll come around quickly.
I had a bit of bad news today in that my trusty chainsaw has finally died. It's lasted me 12 years cutting wood for firings. I'll have to get a new one before April.
Posted by Ben Brierley at 22:10 No comments:

I did a bit of filming today and managed to put together a sequence showing the throwing of a soft thrown composite vase. More work for the next firing. The film is also available to view on the making sequences page of the web site along with a few others.

Posted by Ben Brierley at 21:19 No comments:

The wind has finally abated and after an hour of stuggling with ropes and tattered tarpaulines yesterday I managed to get the stacks covered and rain proof again. I've also finally finished writing up  notes I made last summer while exploring crackle shino glazes and have uploaded them to my web site. They can be found here:

http://www.ben-brierley-woodfired-ceramics.co.uk/Crackle%20shino.html
Posted by Ben Brierley at 11:21 No comments:

It's been a tad windy the last few days

The tarpaulins covering my wood stack have been taking a real buffeting over the last couple of days. Winds gusting to 60mph have torn them to shreds. Hopefully tomorrow will be calmer and I can attempt to batton everything down again. Thankfully it's been dry though. 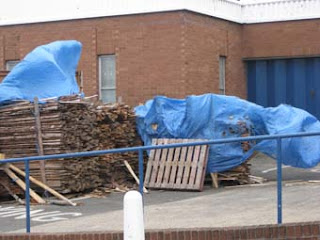 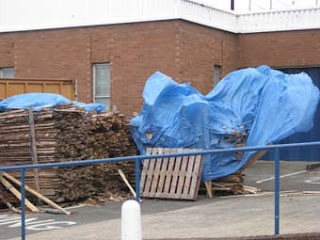 Posted by Ben Brierley at 13:51 No comments: 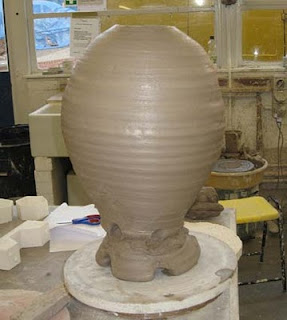 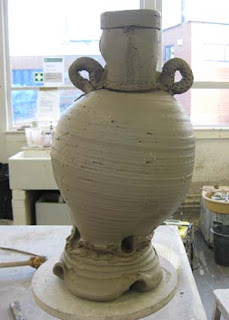 The neck is thrown, marked and joined and the lugs are rolled over a plaster former to create the patterneing and then attached. 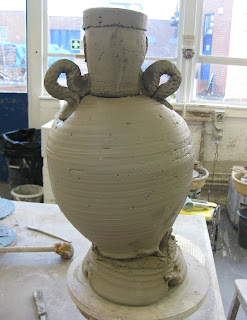 All done while the clay is soft off the wheel. 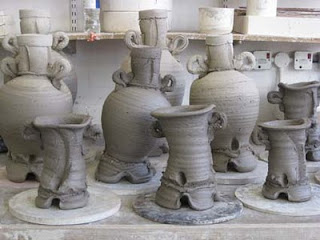 Well, over the last week I've started making some of the larger pieces for the next firing. I've been using up the last of the course clay which I made up. I'm liking what's coming out from this, working with the clay soft and using vigorous mark making. Utilizing the material and textures it produces.
Over the next couple of weeks i'll be having a big session of clay mixing. I'll be making up another load of this course clay which I'm loving (although it's a bit abrasive on the hands after a while). It has a fantastic clay quality and fires beutifully, with great colour generation and the felspar and mounsorrel granite giving some good bleed throughs. I also need to mix up another large batch of 'porclain'. I put it in quote marks because I mix it up in a slightly rusty blunger so it gets adulterated by lumps of rust. Once I've made up my clays I'll try and leave it for a month before using, to let it settle down (although I have been known to throw it straight from the mixer), if I get impatient.
I also need to make up a new batch of ash glaze. I kept all the ash from the firebox of the last firing and will first sieve it to get rid of all the large pieces of rubbish. I don't wash it so I'll mix it straight into the other glaze materials and then sieve the whole lot through an 80's sieve. I'm also writing up the testing which I carried out in the summer in to crackle shino glazes which I've started using on a few pieces. I'll publish these on the web site in the near future. http://www.ben-brierley-woodfired-ceramics.co.uk/
It's blowing a hooley outside and I have to keep an eye on the tarps covering the wood stack as they keep coming loose and flapping around all over the place. Trying to grapple big sheets of tarp in 50mph gusts is hard enough, let alone trying to thread the ropes through the rappidly diminishing number of eyelets.
Posted by Ben Brierley at 14:29 2 comments: