Started on some medium jars

It's been a little while since I've updated as the clay which I made up has been settling. However, now all the course grogged clay which I made a few weeks ago has been wedged and bagged and I've now started to make again. This clay will be used for some medium paddled jars, large and small bowls and a couple of platters. I've now had the chance to start on the jars. 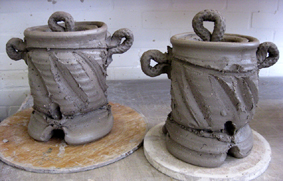 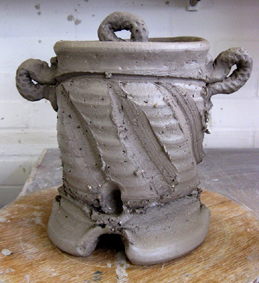 I've sorted out my next firing dates which will be packing on the 12th May and firing 13th - 15th. Freinds Steve Parry and Drew Lawes will be coming over to help with the firing. Saddly my faithful chain saw died a coupple of weeks ago beyon reasonable repair so I'll need to get a new one before the next firing as there will be a lot of fuel to cut prior to it. The porcelain in the blunger is now ready to start putting out on to plaster and bagging up ready to start making mugs and shot cups. That's one of next weeks jobs
Posted by Ben Brierley at 09:34 No comments: