Well it's been a few weeks since the last firing, all the grinding has been done and it was time to start getting organised for the various shows I'm doing over the summer. Over the bank holiday week end 6th- 7th May I was asked to take part in some making demos at Rufford Country Park helping to promote Craft and Design month as well as the rapidly approaching Earth and Fire event now in it's 18th year. (This year it runs from Friday 22nd June to Sunday 24th). This was well attended and Polly Uttley and myself stoically demonstrated even though the weather was freezing. On the Monday we were allowed inside, which at least meant we could feel our fingers :-) 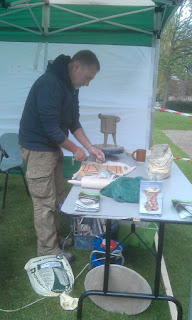 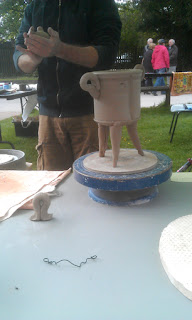 Last weekend 20th May I was showing in Loughborough town Centre in an event entitled Ceramics in Charnwood. Again, this event was organised to promote ceramics in Leicestershire and also to promote Craft and Design month. Again it was freezing but well attended. As I write this we have the first hot day of the year, and I'd be loving it if I didn't have a stinking cold. Whoop! 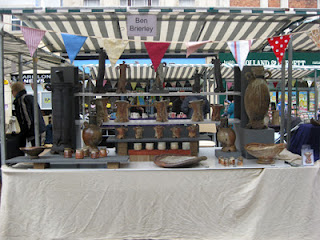 Now looking forward to Earth and Fire in a month or so. followed 2 weeks later by Art in Clay at Hatfield House :-)

Posted by Ben Brierley at 16:30 No comments:

A few pieces from the last firing

Well, the dust has settled or rather been forced to the ground by the persistant rain and, having cleaned up the work from the first firing I've now had the chance to take some images of individual pieces. So, here are a few:

A couple of lidded boxes.  These have been sitting on the shelf for about 18 months because having made them I couldn't work out if I liked them or not. Really pleased I finally fired them. 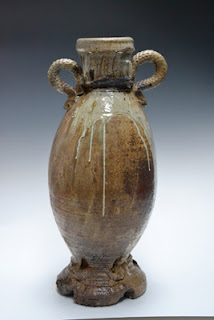 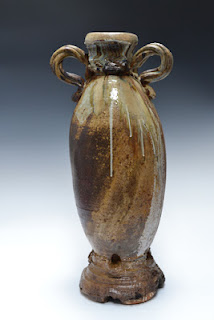 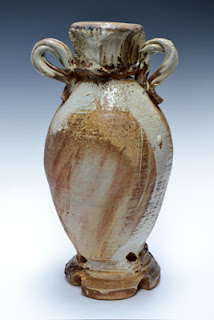 These three bottles stand at around 70-80cm and were fired close to the firebox. 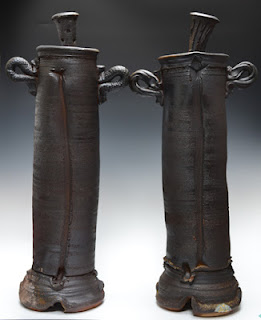 A pair of the black jars stand around 130cm. 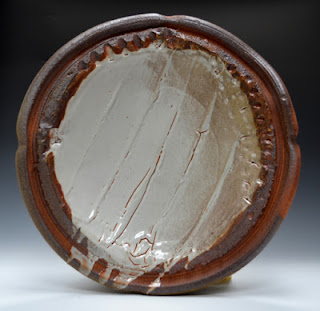 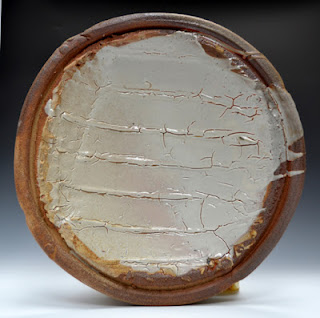 Already starting to think ahead to the next firing which will hopefully be late this year or early next. Also planning a firing in the anagama at Wysing Arts Centre in Cambridgeshire early October time, so plenty of work to be made over the next few months. Had a good couple of days demonstrating at Rufford craft centre over the bank holiday weekend promoting Earth and Fire and Craft & Design Month. My next event is the weekend after next (20th May), in Loughborough town centre where 40 makers will be showing again to promote Craft and Design month. Busy busy :-)