It's been far too long since my last update but plenty has been going on. 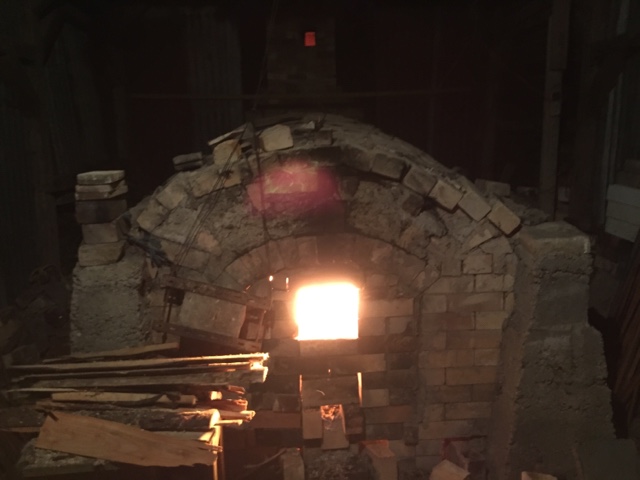 The end of August saw a firing in the Wysing anagama kiln, it had been about 18 months since the last firing, and it was good to get down there. Such a great place for a kiln although it is not in the best of conditions and firing it is somewhat like setting out to sea in a boat full of holes. The results were good though, and it was a good test for all the new slips that I have been using on my new work. 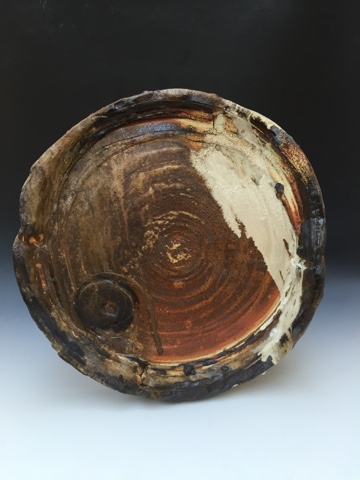 September was fairly quiet, although I managed to get another load of wood Up to Loughborough for the kiln here. Looking to fire in January for a 4 day firing. October has been busy with the first "innovations in ceramic art", show at the guild hall in Cambridge. 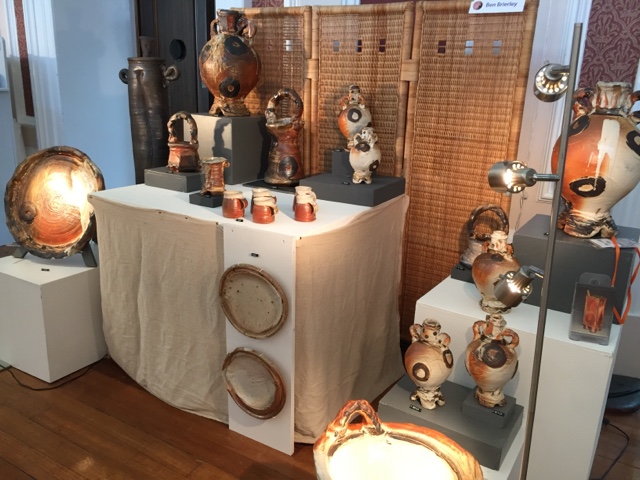 An excellent show which hopefully will be repeated. Last weekend was the annual Oxford ceramic fair, again, another great show. This weekend (the last in October), I'm showing as part of the Warwickshire open studio's Autumn art show at Warwick Arts Centre. This is my last show of this year, just as the  applications come in for next year. I'm now starting to make work for the firing in January, which is great. Haven't been making for a few months and it's a joy to get back to the wheel and start to make again with all the anticipation of seeing the finished fired pieces :-)
Posted by Ben Brierley at 18:47 No comments:

A little bit of TLC 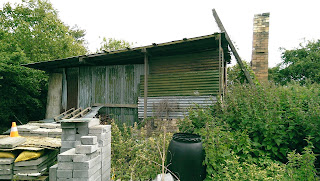 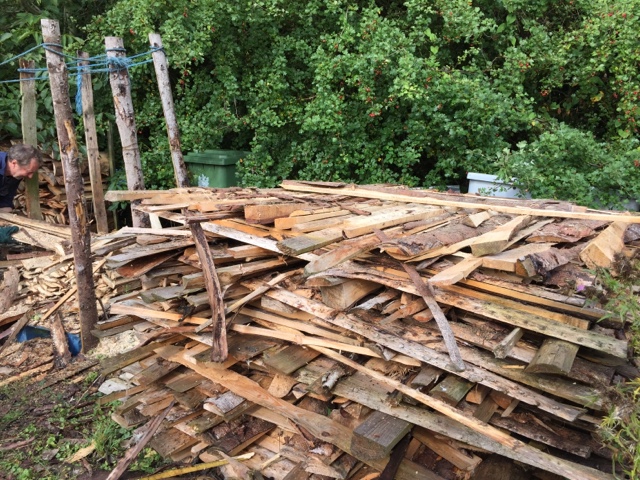 I delivered a firings worth of wood down to the Wysing Arts Centre anagama kiln last year in preparation for a firing. However, while there, noticed a brick  had fallen out of the arch above and just to the left of the firebox. On Tuesday Mr Parry and I finally got time to carry out the repair. It's been over a year since we fired this kiln this time, although we've been firing it fairly regularly for the last 18 years! This realisation came as a bit of a shock as we chatted, wandering through the beautiful wooded grounds of the arts centre having completed the repairs; a conversation along the lines of "these were just saplings when we first fired the kiln", followed by expletive exclamations!

Above: the tree keep, deep in the woods 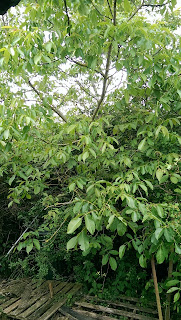 Above: The walnut tree that was about a foot high in 1997

As a result of the brick dropping out, the arch bricks around it had sagged slightly, so, the first job was to brace these and push the arch back up, Old school with a stiff sheet of ply and wooden supports, gently tapping the supports tight to lift the bricks above, slowly we managed to raise the hot face arch back up so that it matched the secondary arch above it.

Above is the  hole in the hot face arch from the inside. The protruding strip of brick is a patch job which we did in the same area about 5 years ago.

Once the hot face arch was braced we removed some of the loosened brick around the hole and relayed them, hard packing any gaps with refractory castable so the arch was once again put under the right sort of tension.

The finished repair, not particularly pretty, but should keep the kiln stable for a few more firings. 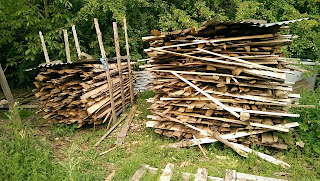 We are aiming to fire Late August followed by a second firing of the New Loughborough kiln a few weeks later, it's shaping up to be a busy Autumn :-)
Posted by Ben Brierley at 14:52 No comments:

It's been a while since I updated this blog, but in my defense it's been quite a busy time :-). I finally finished building the kiln mid April, which left three weeks for the insulation layer to dry before my proposed first firing date. Luckily the weather played the game and it was warm and dry, which allowed the kiln to dry out thoroughly. Below is a continuation of building images from my last post. I had a little more mechanisation to help me with this kiln in the form of a brick saw and a small cement mixer. much easier to cut precise bricks with a saw rather than hammer and bolster and even with a cement mixer it took several days to reconstitute, remix and lay the insulation from the old kiln. 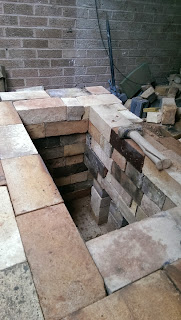 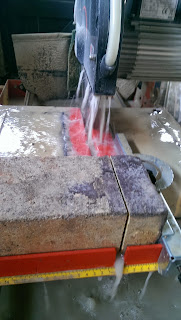 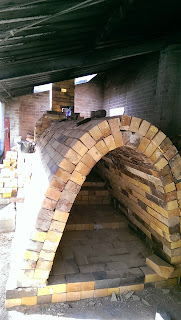 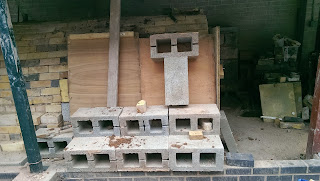 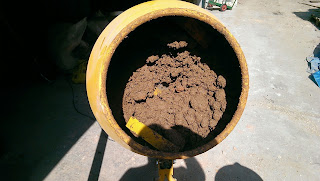 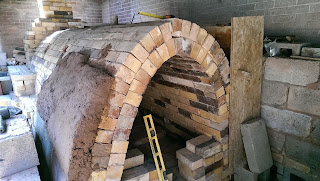 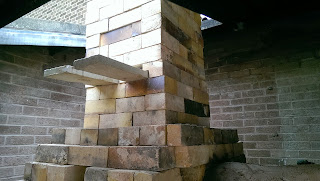 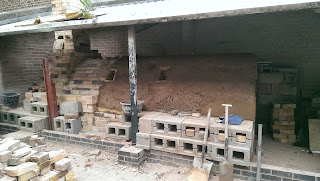 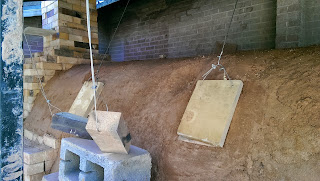 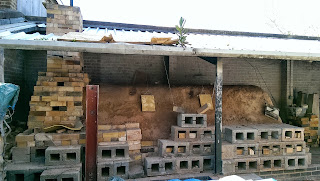 One of my main considerations when knocking down the old kiln and building this new one was to build a kiln which could be packed in a day rather than three and fired in three days rather than four. It is also designed to be an extreme kiln with lots of contact between the wood and the clay with the steep stepping (28 degrees from firebox floor to base of the chimney), generating turbulence to promote ash build up on the work and a strong flow through the chamber. Below is short film (just under 5 mins), which documents the packing and the firing of this kiln.


I'm really pleased with the results of this firing and excited about making new work for the next firing at the end of the summer; hopefully ready to exhibit at the Autumn shows. A huge thanks to  Steve Parry for once again working alongside me to the bitter end, also many thanks to Carl Gray for taking on the first night shift, also to Jo Keogh and Ed Penn for stoking the first day. 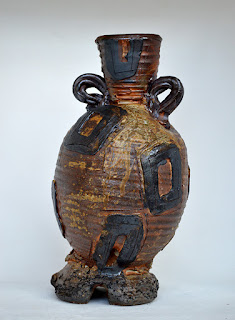 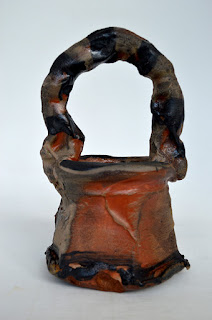 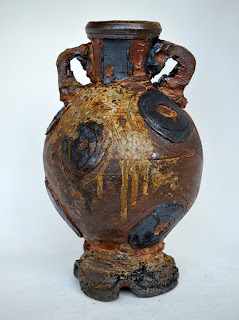 It's now getting towards the time to start preparing for the summer shows. This year so far I'll be showing at:

The buds are starting to swell outside the studio with the odd touch of green from the bravest shoots taking their chances against late frost. Work on the new kiln has been going well assisted by a couple of days help from Steve Parry to really get the arch moving. Here are a few images of the progress so far. 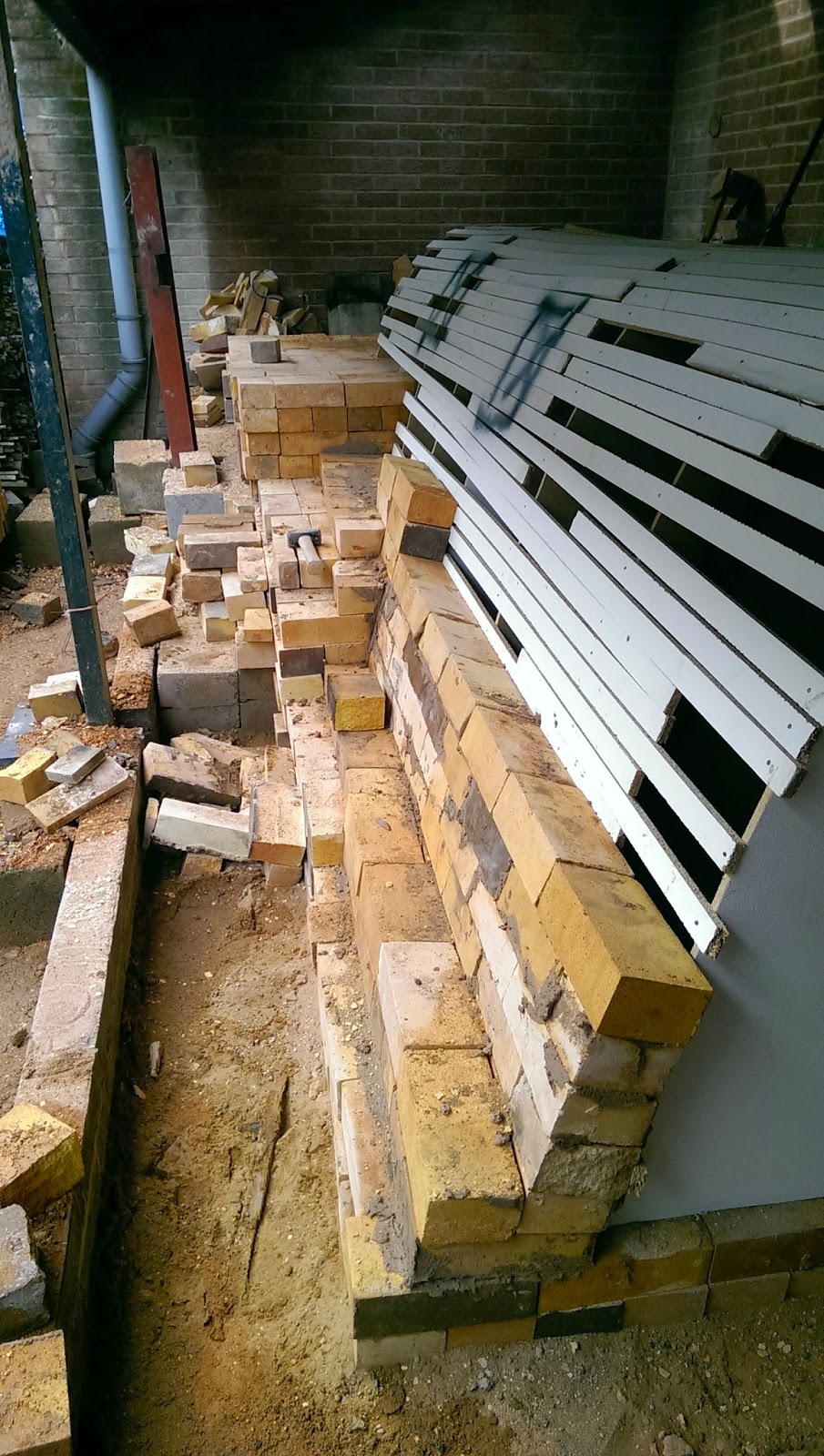 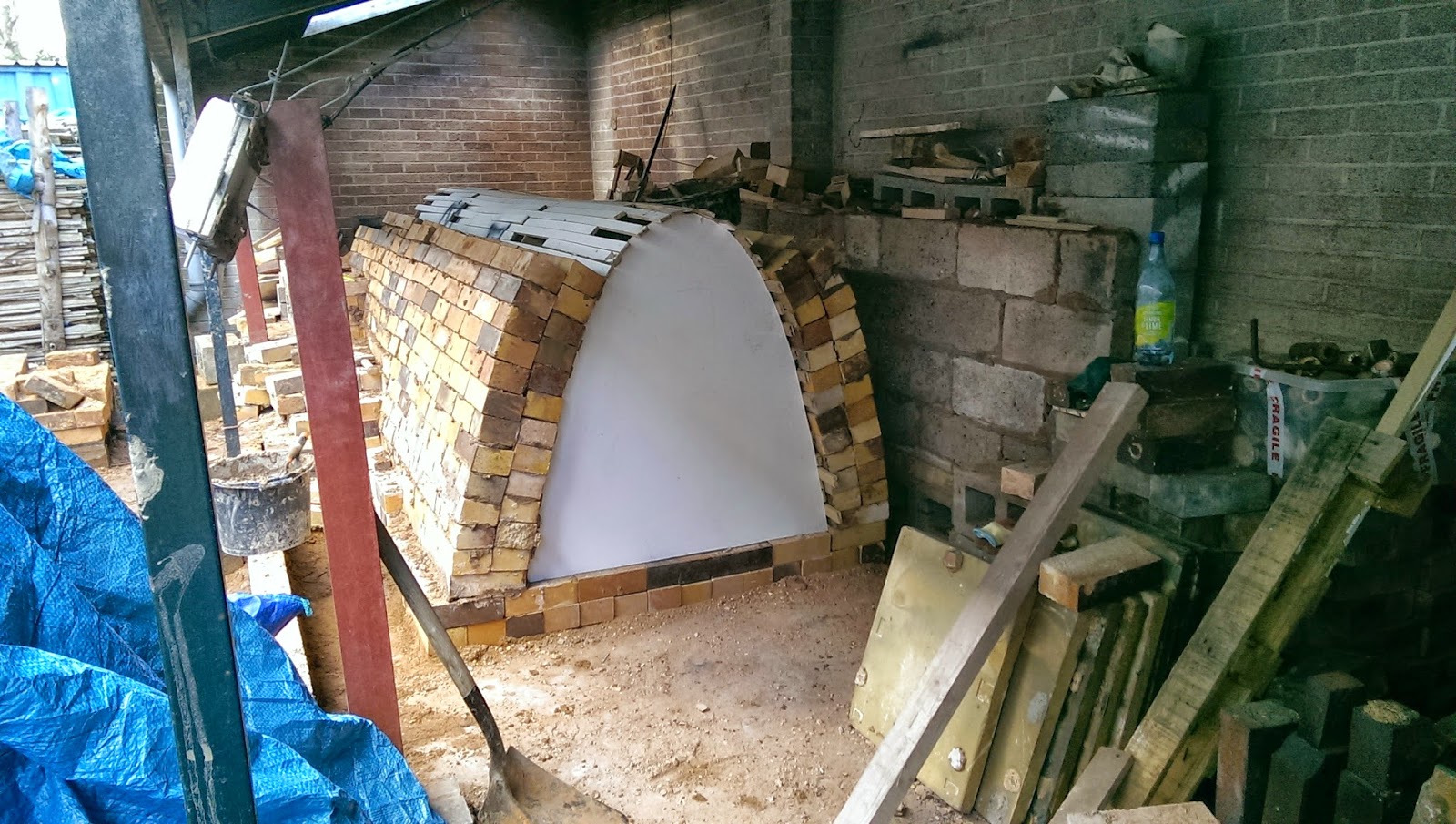 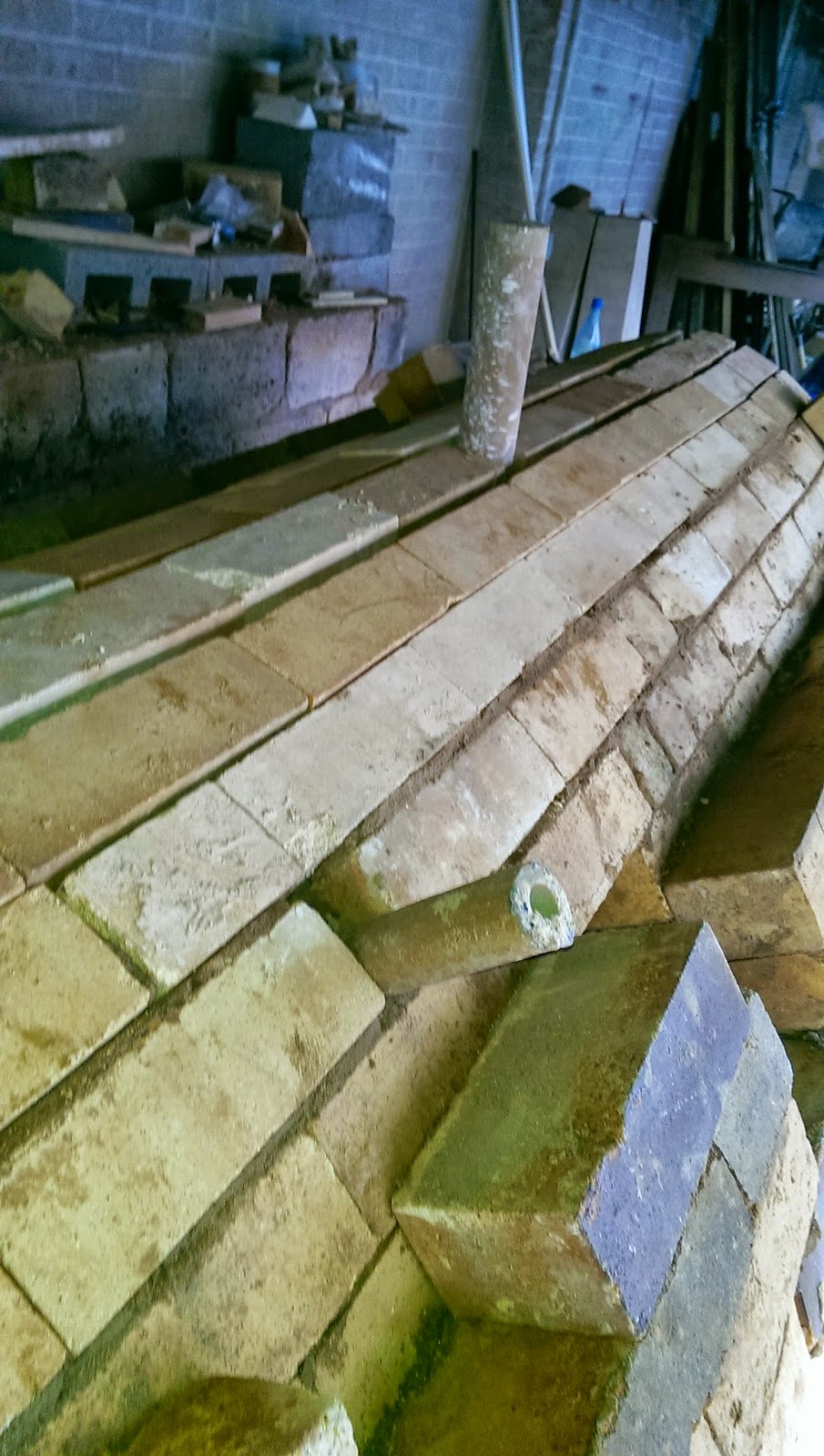 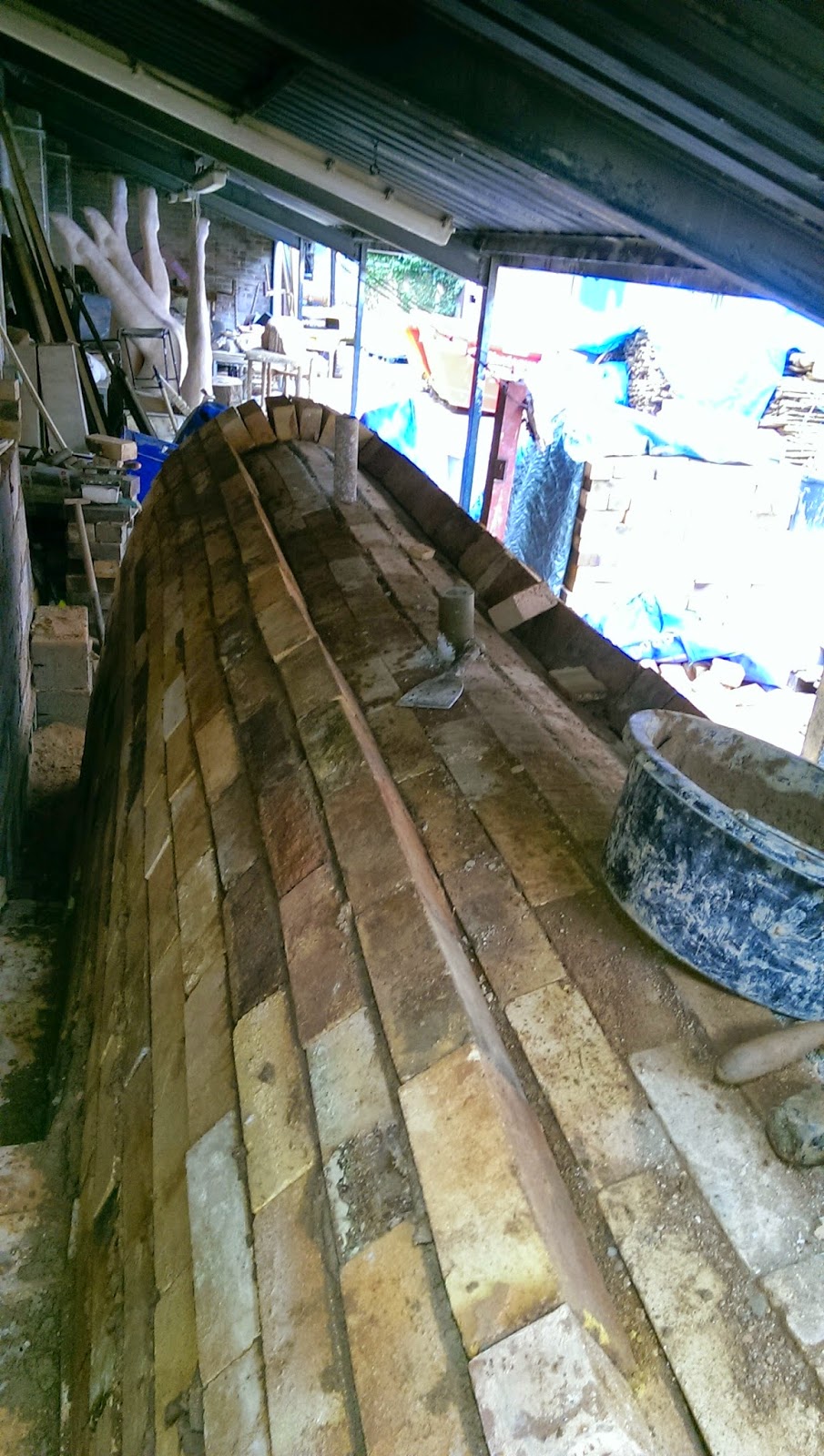 There is still a little more packing to do on the second arch but I should have the former out this week which is always an exciting moment. The collection box at the bottom of the chimney, the active damper and the remainder of the chimney should hopefully progress quite swiftly now with  only the insulation layer left to apply. New work for the firing is coming along, with most of the larger pieces now complete.

Over the next couple of weeks I'll be making up the clay for mugs to take to this years shows, I completely sold out last year so need to get cracking. Last week, I took some work down to The Open Door gallery in Market Harborough, a lovely space run by Janet Pelling. Although the Earth and Fire show at Rufford seems a long way off at the end of June, I know it will come around fast and need to have some good work to take. I'm also very pleased to say I'll be showing again at Warwickshire open studio's with my sister in law Claire Brierley  in July. I'll hopefully update in a few weeks when the kiln has progressed more.

Frosty kiln building and other things

A short blog update, dismantling and building have been progressing steadily and finally the new kiln is starting to take shape. Having taken a bit longer than hoped to take down the old kiln and organise all the materials, at times it has seeming like an exercise in moving tons of materials 3 feet to the left just to put them back again, however, with the new floor laid and the arch former nearly complete, a feeling of excited anticipation is beginning to grow with the longer days. 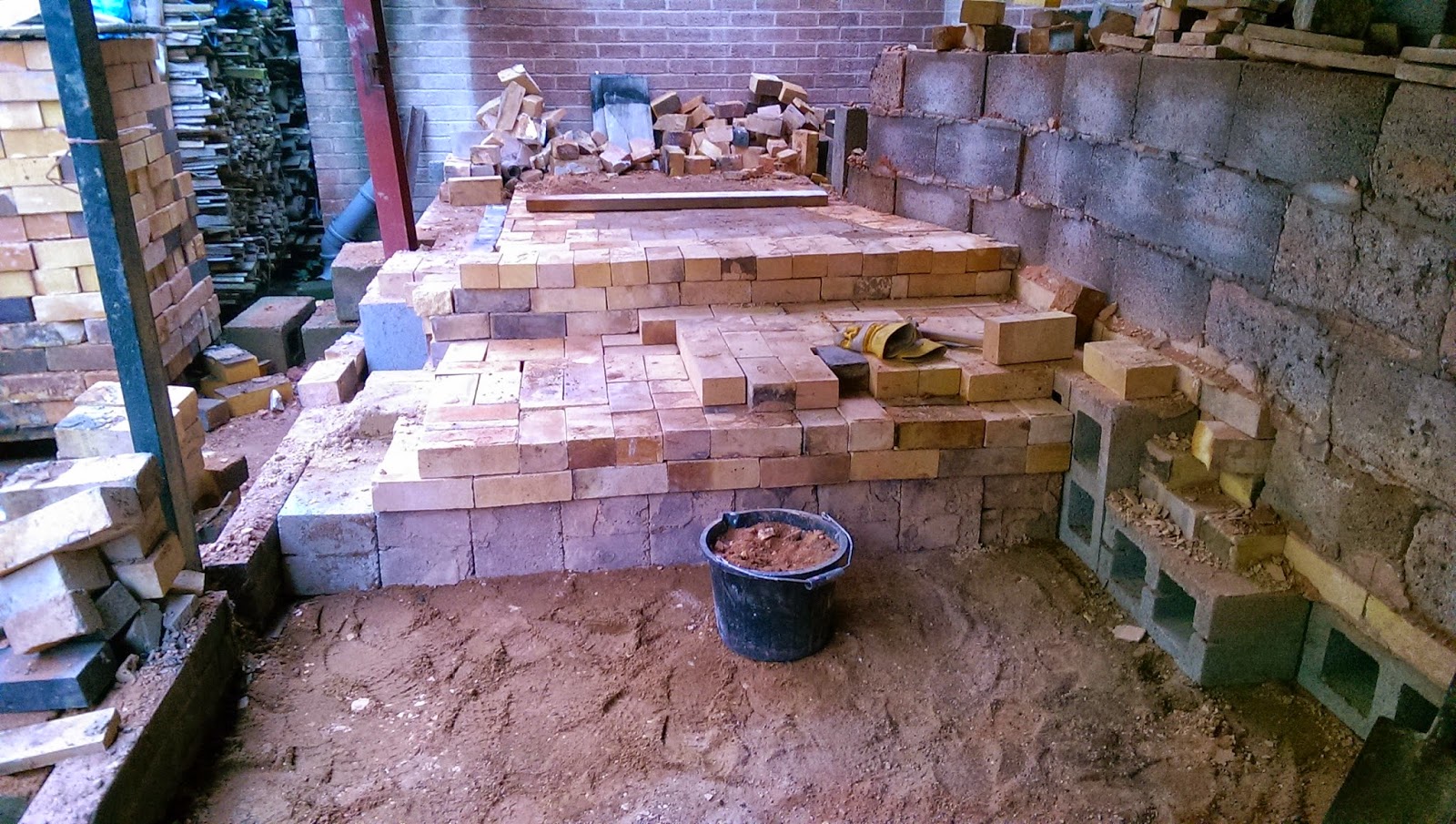 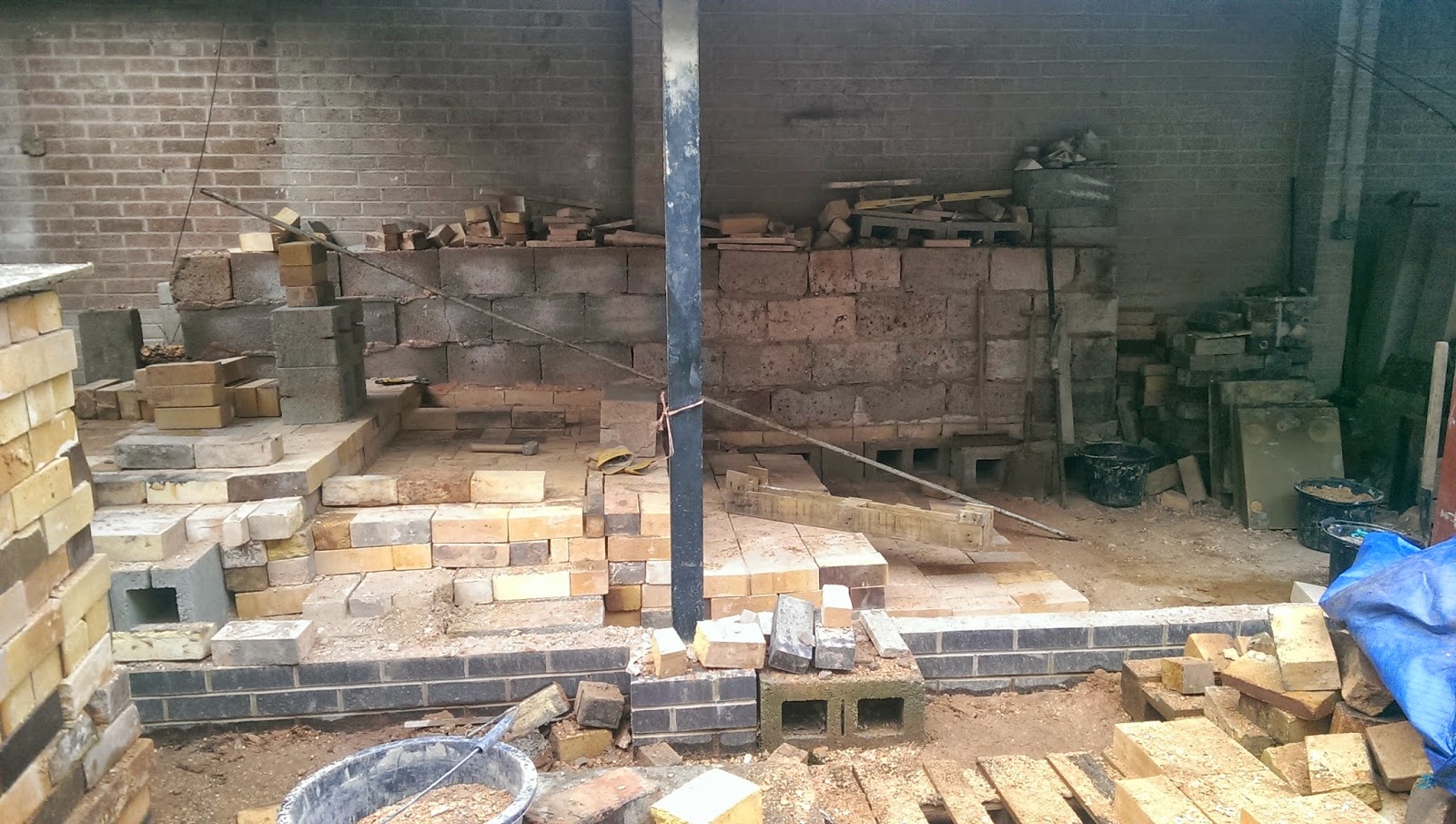 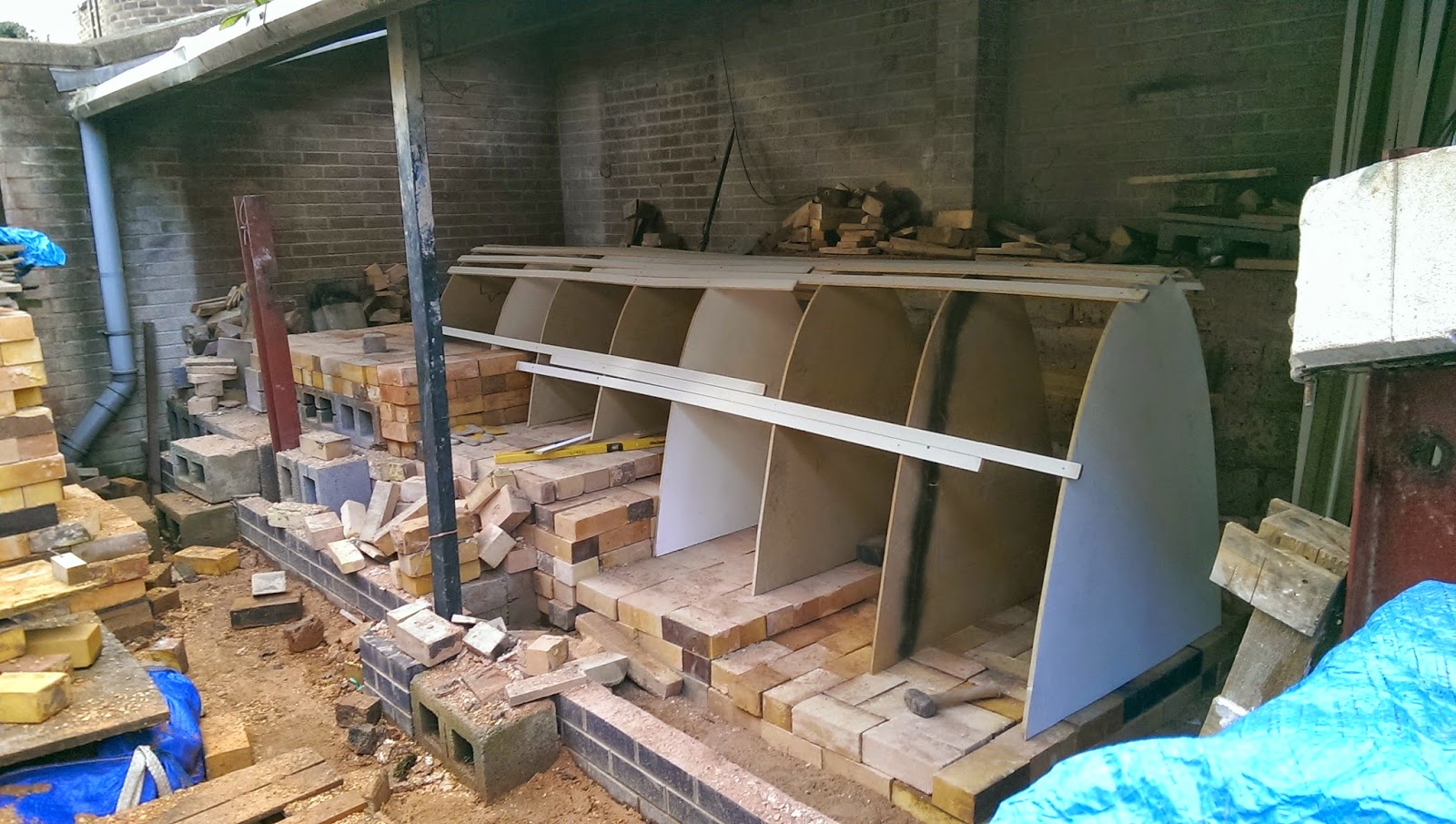 I'm aiming to be in a position to have the first firing in the new kiln towards the end of March now, which hopefully will be better weather wise than February.  The making is coming along well, I'm still making my new work and enjoying a freedom that the forms, slip and surface treatments are embracing. Over the next week I'll be making the clay for mugs, shot cups and beakers which I sold out of last year these are usually the last items that I make before a firing. As I will pack them around the larger pieces.

One of the large vessels 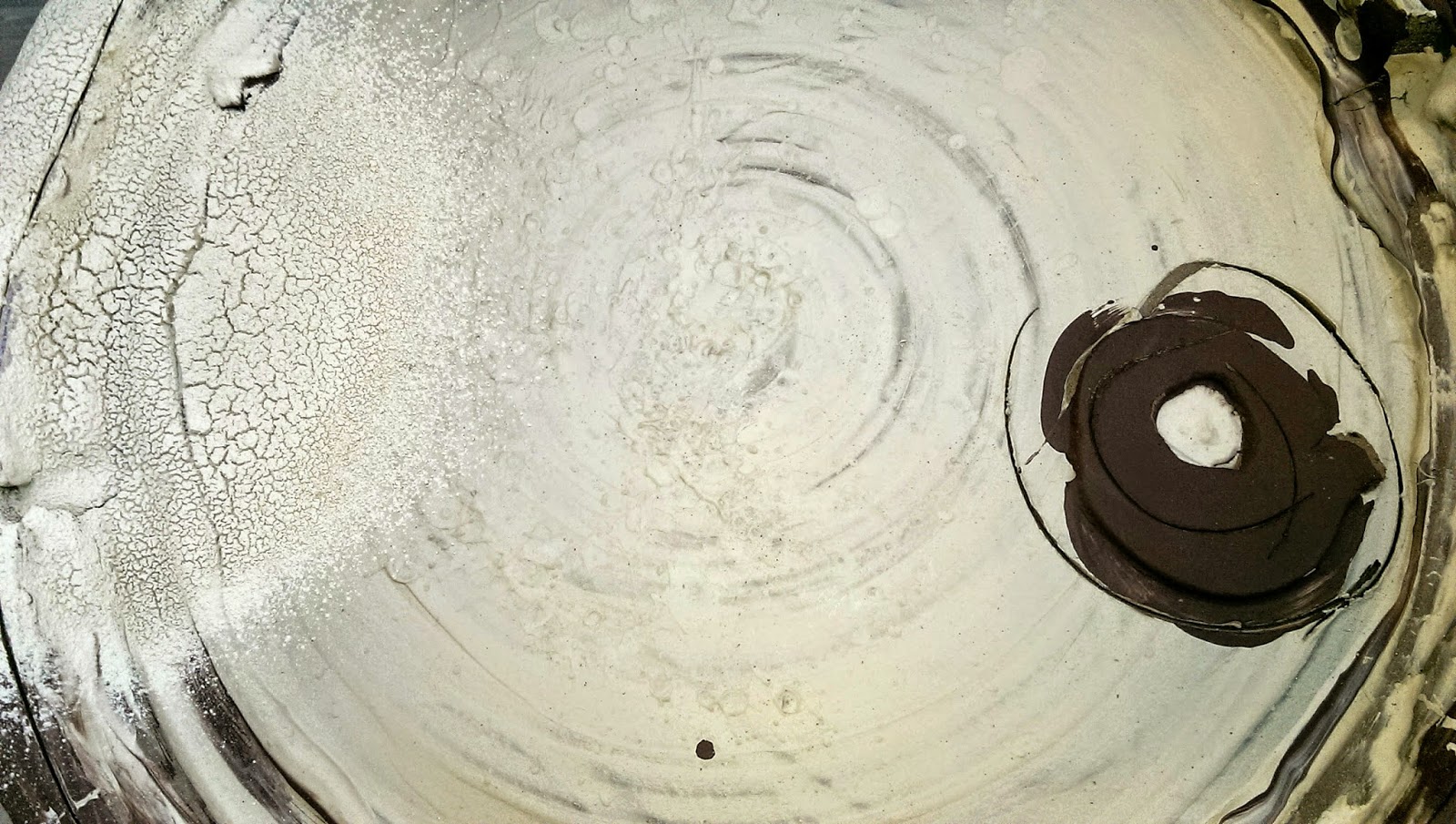 A close up of one of the large platters.
The plan is also to have a firing in the Wysing anagama kiln around May/early June. Hopefully by my next post the arch will be in place.
Posted by Ben Brierley at 16:42 No comments: