I've already begun to plan for the next firing of the Loughborough anagama, hopefully late autumn. I've managed to find a supply of Oak offcuts from a chainsaw sculptor working locally, and collected the first load last week (probably enough for a firing!). The wood is green (which I'm thankful for as it is far easier to split that way), and in large pieces, so this morning it was out with the log splitter and made a start splitting and stacking it to dry in the wood shed. I'm getting another load on Tuesday so needed to make some space. The images below don't really give a good indication of how large some of the pieces are but it took a good couple of hours to produce the stack in the second image. 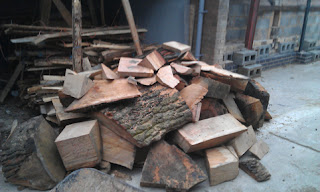 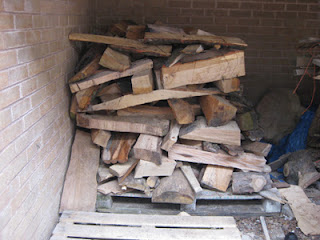 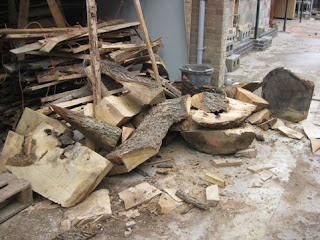 I've also started making work for the next firing of the Wysing anagama which I'm hoping to do in late May/early June. Having recently fired the Loughborough kiln and had a lot of work that I'm happy with from it, I've decided to make a new body of work specifically for the Wysing firing. They are all lidded boxes hopefully with the same flavour as my thrown work but all handbuilt. Some will be black and some white with whatever else the firing bestows. :-) 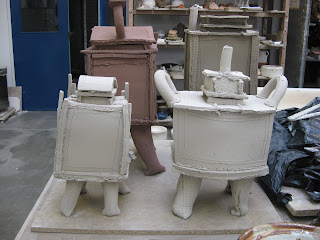 To give some indication of scale the tallest of these is about 75cm.
Posted by Ben Brierley at 15:14 1 comment: