And they all come to life when we're not looking

So, I think the firing went very well. I was able to unbrick the door on Tuesday evening and we unpacked on Wednesday afternoon. Really good, plenty of heat and reduction (even down the side stoke side of the kiln which can be slightly more oxidised). We had very few losses. A couple of pieces which had moved a little and stuck to others but in the grand scheme of things not much really. I've now had a chance to live with the pots for a while and I'm very pleased with the results. The very course clay which I mixed, flashes wonderfully in all parts of the kiln and receives the fly ash well. The shino glaze which had its first anagama testing on a few pieces in the last firing is great beautiful ice whites with pinks and oranges burning through in places. Works really well with the clay body as well. I still have a bit of grinding left to do just to remove the last traces of wadding and then I shall start to put together my stand for Earth and fire at the end of june. My exhibition at the Galanthus gallery ends this weekend so I'll be off down there soon to collect any unsold work. I'll keep updating as my exhibition stand for the summer takes shape. Whooop! Some pics. 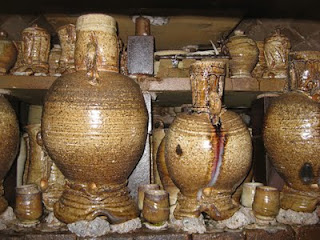 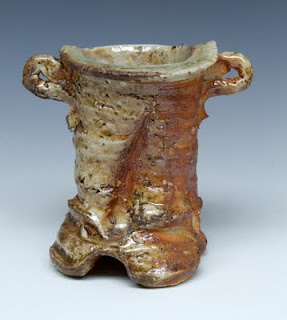 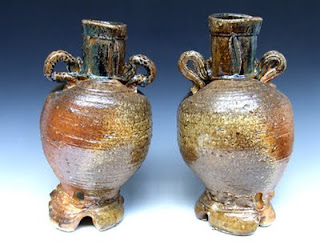 Posted by Ben Brierley at 10:24 No comments:

Well that's it, another firing done. I've got home and had a great hot bath, washed off the grime of 4 days in the yard, all the nervousness and anxiety from the preparation for the firing is gone and it's time to reflect a little on the firing. It went very well I think, and apart from the appearance of a random 29th birthday party at 2am Sunday morning complete with chocolate cake (which was very good), and Steve and I inadvertantly getting involved in a fashion photo shoot this morning, went very smoothly. We had cone 12 (1300 C (ish), over at the back early on Saturday morning with all the front cones over, bar the cone 15 (1420 C (ish). We ended today with just a  bend on the cone 15. The kiln was pretty relentless and didn't leave us much time for rests between stokes but, looking through the door before we clammed it up this afternoon the contents inside looked very glassy with plenty of runs visible. The kiln responded really well throughout the firing to small adjustments that we made. I still have a slight sadness that this was the last firing, as it has been a great litttle kiln, having said this, after we had clammed the kiln up we went to have a look at the new kiln site. I'm looking forward to buiding and firing it.
A big thanks go out to James for his help with stacking the last of the wood stacks, and Deb for a good days side stoking hardwood slats yesterday. We will be opening the kiln on Wednesday afternoon so now three days of speculation and antisipation. 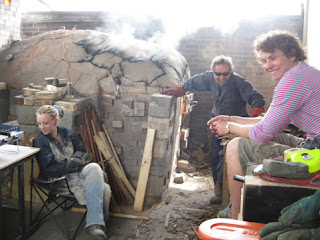 The kiln reducing just after a large stoke: 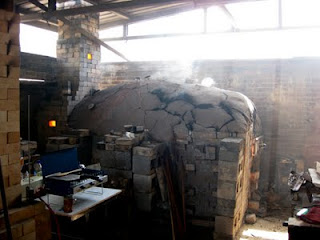 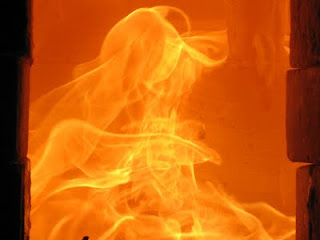 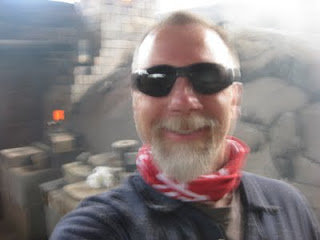 Posted by Ben Brierley at 17:23 No comments:

The firing is underway!

Well after a 10hr pack yesterday, followed by pizza and wine we bricked up the wicket and lit the fire this morning at about 9am. It has been kept small at the front of the grate until about 3 this afternoon feeding through the lower firemouth, and we are now starting to feed through the upper firemouth as well. The pyrometer which I've stuck in the top blow hole is now reading about 400 C 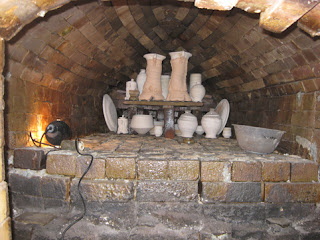 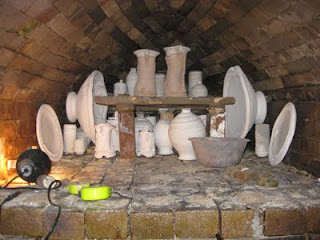 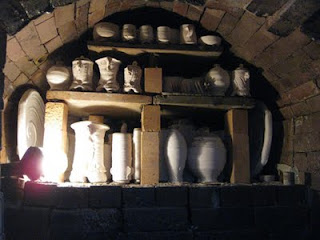 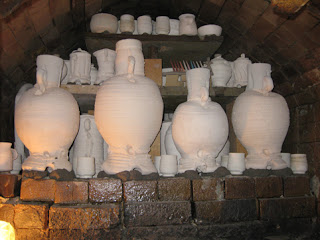 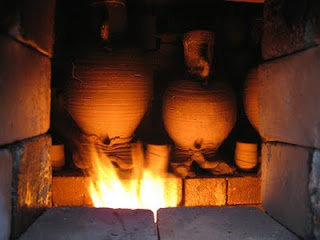 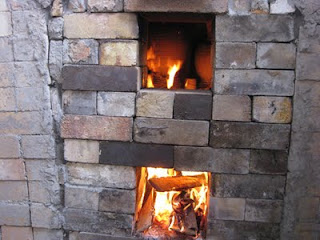 Fire is building well still have the lower stoke hole open, but filling it with wood to burn down and form a cross hatch with the wood being dropped through the top firemouth. Soon time for supper and heads down for the first night shift. I'll be stoking till 3.30 when Steve will get up to take over. All good so far.
Posted by Ben Brierley at 19:02 No comments:

It's been pretty hectic over the last couple of weeks. I've delivered all work to galleries and the Ceramics in Charnwood event held in Loughborough town centre on Sunday was a great success with plenty of interested visitors looking over the diverse ceramics on show.
I spent Monday and Tuesday chain sawing wood in the wind. How does so much saw dust end up in my socks??? The yard is now full with another pallet of wood to be cut up on Saturday when there is room. The kiln has been cleaned out and the grate fitted ready for the start of packing. Steve Parry is coming up tomorrow to help with the packing and firing and we will light the kiln on Friday morning and fire through to Sunday evening. This will probably be the last firing of this kiln as I am dismanteling it in the Autmun and rebuilding a slightly larger one. So, a bit sweet and sour, it's a good kiln but I'm striving for more diverse zones in a firing and the new kiln should give me those. 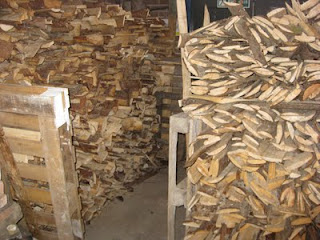 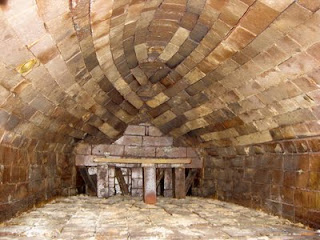 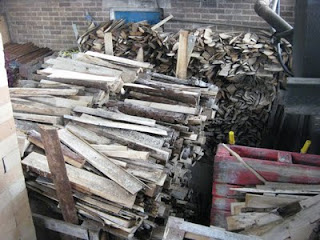 All my work to go into this firing has been glazed. I am using more shino in this firing than I have for a while. I have a couple of large bowls which I am particularly excited about seeing. The new bulbous bottles have my titanium ash glaze applied and I'm looking forward to seeing haow they come out. 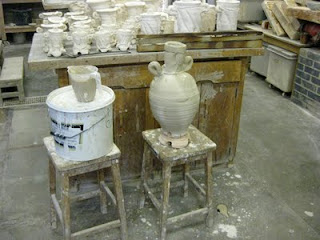 I'll be updating this blog through the firing to keep a track of how it's going.
Posted by Ben Brierley at 16:25 No comments: