Damper: but not in a wet way

I've spent the last few days taking down the new kiln chimney in order to put a damper in it. Not suprisingly, it's a lot easier to take a chimney down than it is to put it back up again. 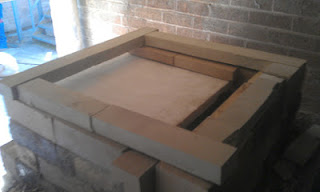 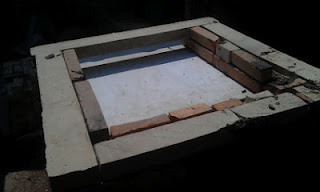 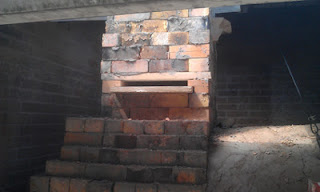 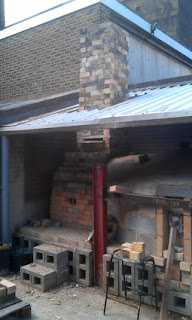 I've also lowered the chimney by about 6 courses, not due to laziness you understand but I don't think the kiln needs as much draw as the chimney was providing. Hopefully with the combination of a slightly lower chimney + a damper I should be able to have a little more control over the internal atmosphere.

I've also been spending some long overdue time updating the website. Some new pages documenting the building of the kiln and of some of the work that came out of the first firing as well as a bit of a general tidy up.

I should be getting the wood for the next firing in September and will start making next week.
Posted by Ben Brierley at 16:36 1 comment:

It was great to be showing at 'Art in Clay', at Hatfield House over the weekend, and good to catch up with folks and meet new makers, collectors and enthusiasts. The above picture was taken on the Saturday when the weather was on and off (in this picture off but imminently on or the other way around depending on your view :-). Warwickshire open studios this weekend and then back to start the modifications on the new anagama chimney.
Posted by Ben Brierley at 16:44 No comments:

Ready for Art in Clay

I've been dodging the showers this afternooon packing the van ready to head down to Art in Clay at Hatfield house in the morning. Looking forward to the show and catching up with folk. The show runs from Friday to Sunday 10am - 5pm. Good British summer clothes packed: sun screen and wellies and some good beer for the evenings. Also on board are pots destined for the 'Woodfired', exhibition at the Contemporary Ceramic Centre, at 68, Great Russel Street, London, which runs from the 16th August until the 8th September. Next weekend I'll be down in Stratford-Upon-Avon demonstrating at Warwickshire open studios. Also showing are painter  Claire Brierley and Photographer Sophie Ganner, the show looks great. Hope to see you at one of these if you can make it :-)

Shower.
Posted by Ben Brierley at 18:13 No comments: