Well, My stand has been repainted after a bit of water staining from Rufford, pots all sorted and the van is finally packed. Bag is also packed, and a good breakfast shared with my daughter of cheese on toast and eggy bread inside me. Off up to Potfest in the Park at Hutton in the Forest near Penrith in Cumbria this morning. Looking forward to spending four days at this beautiful place showing my pots. Back home on Sunday night and back off down to Art in Clay at Hatfield House next Thursday. It's going to be a busy couple of weeks!! Then off  to the Cornish coast for a spot of kite boarding and some chillaxing :-)
Posted by Ben Brierley at 09:29 No comments:

Well, after a successful Rufford. The van is unpacked again and I've been preparing the stand for Potfest in the Park at Hutton in the Forest, Cumbira. Due to a bit of rain at Rufford I've had to repaint the whole stand and it's now ready to go. I also sent out some fresh work to the SCA gallery in Shrewsbury. Last week I spent a couple of days (aided by Jo Bird and Steve Parry), getting a firings worth of fuel down to the kiln at Wysing Arts Centre. I'm still aiming to fire this kiln in November some time but haven't fixed a date yet. The priority was to get the wood down there, cross stack and cover it all so that it dries. Steve also gave the inside of the kiln a good clean out. Suprisingly the undergrowth wasn't too rampant and the walnut tree that has been growing behin the kiln (from a sapling when we started), is now huge and covered with what promises to be a bumper crop of nuts. We'll have to come up with some recipes for a bit of kiln cooking in the autumn. 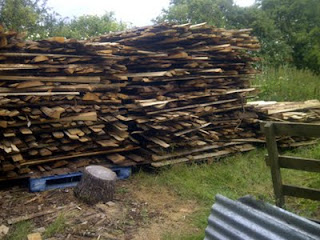 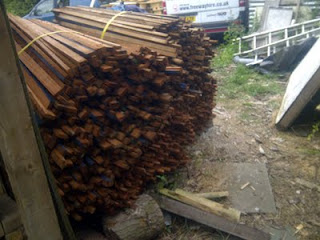 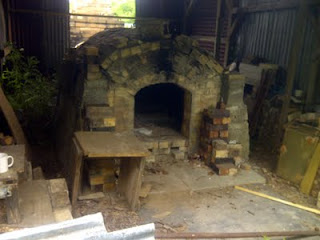 We cheated slightly with the hard wood slats. As it was getting late in the day and we didn't fancy hand balling it all round to the other side of the kiln, we constructed a rather ingenious track out of ladders which allowed us to slide the bundles out of the van and stack them on top of each other. These were then covered with tin. The hard wood slats that I use are so dense that even if a bit of rain gets in it won't make a great deal of difference. So onwards to Potfest in the Park followed the following week by Art in Clay at Hatfield House.
Posted by Ben Brierley at 10:46 No comments: